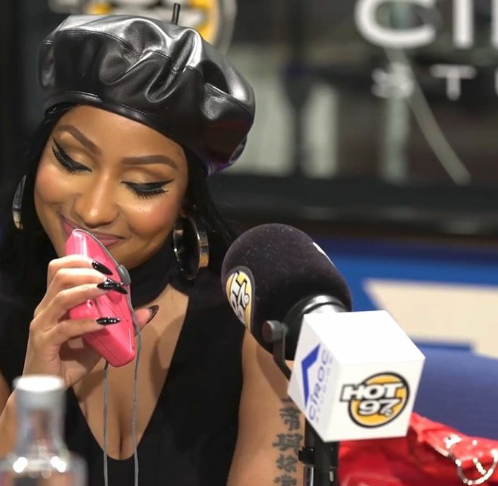 Nicki Minaj and Safaree Samuels are in an all-out Twitter war. After the Queen rapper put Safaree on blast during an interview with Hot 97, her ex-responded.

"How dare you bite the hand that feeds you,” Nicki said Tuesday morning.

Safaree responded, writing, “Unless I really cared still I could not let the mention of someone's name get me that riled up.”

Unless I really cared still I could not let the mention of someone's name get me that riled up. That looks like some1 who either stlll cares or just holding on to a lot of hate towards someone. How many times have I said I never wrote ur raps? Nobody even talks about that anymore

Nicki clapped back with a series of tweets about their relationship and specifically took a moment to drag Safaree’s hairline into the conversation.

U stole my card & told me you thought it was an account with “free money” that I didn’t know about. On God. God will strike you down & more for lying. Ha! Stop saying u packed & left ! On Jesus u came to my house CRYING BEGGING to go w|me to Europe to the EMA’s. I said NO DUMMY

Sherika & I had a bet that soon as you knew meek was bout to come home your crawl back & ya did!  came to my house CRYING. JOYCE WAS THERE! My whole glam was there! Left who?!?! You gettin aired out on #QueenRadio too on Thursday! Apologize & STFU

I should’ve never paid for that gyatDamn hairline!!!! It fell back out cuz God don’t like ugly!!!! You used me but God had other plans!!!!!

Btch you hit me & meek asking us to get your dick pic back from someone. Lol. You were playing with ur dick in the shower by urself with suds & shit. I have the email where u said you couldn’t pay ur electric bill & why you lied on me but go AWWFFF SIS! https://t.co/QkoZjLFkf4

Samuels continued responding to his exes tweets, arguing that their relationship ended because it was too toxic. He also claimed Nicki once cut him so badly he almost died, and that she was allegedly cheating on him with Meek years before their split.

We know each other inside out. Everything there was for us. I didn't use your card for prostitutes. We both didn't trust each other. You did shit I did shit. You said you were messing with meek a few years b4 y'all got together and I'm not mad at that.

Remember the night you cut me and i almost died the police and ambulance had to take me out the crib on a stretcher and I had to lie and tell them I was trying to kill myself so they wouldn't take you to jail. When things like that start happening more Than once it's time to dip.

How was I begging to go to Europe with you and you were in a full blown relationship towards the end of ours? I knew it a wrap. I still have the email when you hit me saying let's spend Christmas together and work things out so please stop.

I thought you were gonna zen and cleanse your mind and body what kind of zen is this .. what in the zen sorcery is going here

Most importantly, Safaree clarified that he and Tyga don't have the same hairline treatment doctors.

1st off Me and tyga didn’t go to the same dr. We did it the same day. Diff doctors . Listen I don’t know if this has to do with 1st week sales but you need to finish your zen. And don’t talk about vh1 checks cuz the way you’re acting it’s like your auditioning to be on LHH

Before raging an online battle with her ex, Minaj had her Twitter fingers aimed at DJ Self over some disparaging comments he made about her album. Nicki claimed Self only made those statements because she'd refused to be affectionate toward him, but he quickly rebuked that claim.

This is also related to her beef with Safaree, because both Self and Samuels are part of the Love & Hip Hop network of shows, and are cool.

You hold on to everything. your problem with Dj self is because me and him are so cool and nothing else. You have a problem with mona Scott because she put me on the show. let all that ish go. And now I stole your card? The 1 you gave me he pin for and had me doing ish with?

Self-appeared opposite Cardi B in several scenes, while the Bronx rapper was on LAHH for two seasons. This week, Self-seemed to suggest that Nicki's album didn't deliver as much as Cardi's. In response, Nicki promised to spill what Self formerly said about the "I Like It" rapper. No one says Cardi's name directly, but it's quite obvious given Cardi and Self's turbulent history together on the show.

It's impressive that Minaj is finding time to drag everyone online in between press stops for her new album. We'll have to wait and see if all this drama has any effect on her streaming numbers, but as they say, all press is good press. *sips tea* 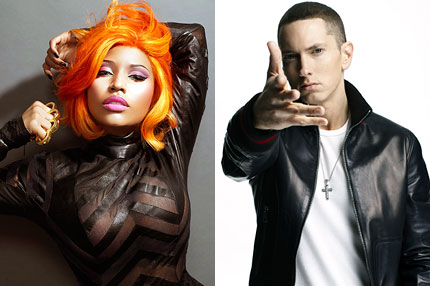 Nicki Minaj, 35, 35, left her Barbz shook after posting an Instagram video promoting her appearance on YG’s new song, “Big Bank. In the May 25 cut, Nicki lip-matches up to her lines on the track, which likewise includes 2 Chainz and Big Sean. "#BIGBANK OUT NOW!!!!!! @yg @2chainz @bigsean Told'em I met Slim Shady. Packed away an EM!!!," she subtitled the video. The expression "packed away an Em" had one fan made an undeniable inquiry: "You dating Eminem???"

"Indeed," Nicki answered in the remarks, apparently "affirming" that she and the 45-year-old rap symbol are as one. Or on the other hand, she could have been trolling for somebody who took her verses truly. In any case, fans were cracking. "Sooooo, Nicki Minaj and Eminem dating now!? Affirmed by her by means of remark on her IG page?! Stunning! Shocker!!!," tweeted @crownme_cute, while @springbell couldn't trust it. " 'Nicki Minaj is dating Eminem' huh/exonerate? what? that is a reenactment glitch. Sorry, What?" "Nicki Minaj and Eminem are dating am I going to find out about an alternate couple I never expected ordinary at this point."

"dawg disclose to me this Eminem + Nicki thing a joke," asked @_TVDE. All things considered, TVDE, don't bounce out the window yet. It's more than likely that Nicki was simply trolling in the remarks, and that her verse on "Huge Bank" was presumably simply her parading her riches through some cleverness lyricism. "Back again/Back to back Maybach, stack the M's/Told em' I met Slim Shady, pack the M/Once he goes dark, he'll be back once more," she raps, which as Genius call attention to, "M" is a "two-sided saying" for both the millions she's acquiring and the M-logo of Mercedes' line of top of the line extravagance autos. Thus, to clarify the joke, she goes from stowing "Ms" as in millions to packing "Em" as in Eminem.